The Cockroaches found around Perth can be put into two distinct categories, those that were introduced from overseas and those that are native to Western Australia. 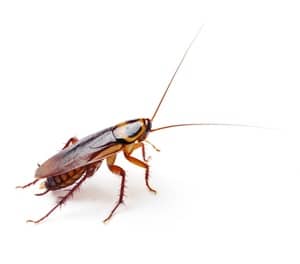 The "lntroduced" qlecies include the notorious German Cockroach, the slightly larger Brown-banded roach and the much larger American roach.

These particular roaches are all disease carrying pests and inhabit areas in and around our homes.

What Are The Different Types Of Cockroach In Perth?

Here are the 4 major Cockroaches you will find around Perth, Western Australia.

German roaches can number in their hundreds or even thousands if left to multiply. They are the smallest of all roaches found around Perth and are distinguished by two dark stripes running down their back.

They are usually found in kitchen areas where they will inhabit fridge motors, microwaves, under jug stands and almost anything electrical that is left on for long periods of time such as phone chargers etc.

German cockroaches have the remarkable ability to maintain development of their egg cases long after the actual roach has died. This can make total eradication difficult.

American roaches are the large red-brown flying ones that are commonly found in and around dark damp areas such as bores, drains, cavity walls and under concrete slabs.

Being the largest of cockroaches found in the Perth area, their droppings are often mistaken by homeowners for mouse droppings, especially in kitchen cupboards. These roaches can spread diseases as well as salmonella poisoning.

The "Native" Australian cockroaches found around Perth appear to be more abundant than ever. Every suburban street in Perth has literally thousands of these roaches under tree bark, behind palm fronds, under mulch, between sheets of fencing and under almost any external object.

These are mostly the dark brown-black Wood roaches with one species in particular having a pale frill around its head.

These roaches are prolific during the hot summer months when their usual supply of moisture tends to dry out making them agitated.

It is during this time most homeowners notice them entering their houses for cooler air and moisture.

The small, brown cockroach is pale and has bands across the body. Unlike other pest species it can live in dry situations which makes them able to be active throughout buildings rather than just being restricted to damp areas such as kitchens or bathrooms.

Their wide dispersal means they make control of their population difficult because there's no one place you know where these little pests will pop up next!

Where Do Cockroaches Hide?

It's not always easy to find the Cockroach hiding in your house. You might be surprised by just how many places they can get into! These bugs like dark, quiet spaces that are away from people and other living creatures (like pets).

Some of their favorite spots include: around wiring and electronics near televisions or computers; under sinks, dishwashers, refrigerators; walls/ceiling pipes--basically anywhere warm!

Although it is impossible to completely control these Cockroaches, most of our customers notice a huge drop in numbers long after having one of our Pest Packages.

All the Introduced "species" of cockroach are covered under both our Pest Packages. We have an array of products such as specific baiting gels, dusting powders and residual sprays which are all suited for indoor use if necessary. These are perfect for removing Cockroaches from your home or business.

Make sure you get in touch with us about Cockroach pest control Perth and we will give you a free quote!